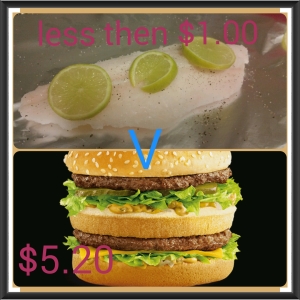 I hear all the time from People, the media and of course the fast food industry that it’s to hard, to expensive to eat healthy.

By accident I realised that one of my family’s favourites cost me about $2 and I don’t have to put a Bra on to get it WOOHOO.

I always have some frozen fish in the freezer we like the one from Aldi. This dinner cost about $1.00 with some extras and I think I’ve spent about $2.00 If I get fancy maybe $3.00 per person that’s $9.00 for my house on a quite night AMAZING.

So I want to share with you what I do

Start by turning oven on 200c then chop sweet potato and place it in a pot of water on the stove top. Smear a little butter in the middle of the foil piece place fish on top (mine are still frozen at this point) season with Pink salt and cracked pepper add a couple of slices of lime on top and a small dollop of butter. Now wrap up the foil like a parcel and put it in the oven.

Check out what’s on telly for about 15mins then you fish and potato should be done just check both. Mash the sweet potato if you like I don’t use milk but you can.

If we feel like it we will have a massive side of greens which is what brings us to $3.00

Let me know what you think of the Fish

IT’S NEVER BEEN OK and NEVER WILL BE

It breaks my heart to hear what has taken place in one of our local schools the event that took place has shocked me to the core.

A young girl was physically assaulted at school by a male student I was not there so I don’t know exactly what happened so I’m not going into the details.

What infuriates me is that there was a group of children standing around cheering the male student on and encouraged him to keep going. Why would any one encourage such atrocious behavior? Why would these children believe it’s OK to encourage such behavior?

There were from what I have been told students there also trying to stop this attack from taking place. The witnesses had to make statements as you would in any circumstance. Unfortunately the witnesses are now been bullied and called some disgusting names for standing up against this attacker and his actions and for saying that it’s not OK.

What have we as a community done to our babies? to the future of our country?

When did it become OK to assault another person? Why as victims should we shut up and put up. As a community are we teaching our kids that this is ok? It’s ok to beat up on our partner, our friends, our family because we feel like it or a better excuse we’re coming off some F’dUp drug?

Two women a week die at the hands of a lover or exlover this doesn’t include the men that are also killed by their lovers or exlovers. We have no way of knowing how many others are harmed, hospitalised, beaten within an inch of their lives all at the hands of their so called loved ones. Then you also have the ones that end their own life because they don’t believe they have a choice. Most victims never report their abuse or they hide it and cover it up.

I don’t believe it is the schools responsibility to teach OUR child how to be decent human beings as this is a parents job but I do think as a community and a school community something does need to be taught to the student about self love, self respect and respecting others I do know of some schools that do, do this and do it very well but it needs to be mandatory in all schools starting in primary school.

I don’t know what I can do to help change this way of thinking but as a survivor myself I’m here to tell you all I WILL work it out, this must change, WE MUST CHANGE!!